Prince’s hair always SLAYED!!! Why? Because when you have a great GlamSquad you never let them go or walk away!!! You know and understand the value that they add to your VISUAL ARTISTRY!!! Kim Berry was very instrumental to Prince’s visual artistry. Kim was Prince’s Hair Designer for 25 years!!!!

There’s something Prince said to his former manager once “These days people not only want to hear the music they want to see it!”. How profound is that? Price had foresight about the future on many levels and one was the coming age of music video’s and even motion pictures for musicians in a way that would change the landscape of music and he was right!

Look at what Beyonce is doing with her music/videos. I wonder if Prince told her that that was going to be the next way to do music? Not just as a disc or digital but audio/visual digital download!! It’s genius! And something that certainly sounds like he got wind of long before anyone else did ; in his early days that not even the music industry would take notice of!

One thing for sure Prince surrounded himself with like minds…visionaries…people who had vision…and people who were experts at their gifts; the gifts he recognized in them! 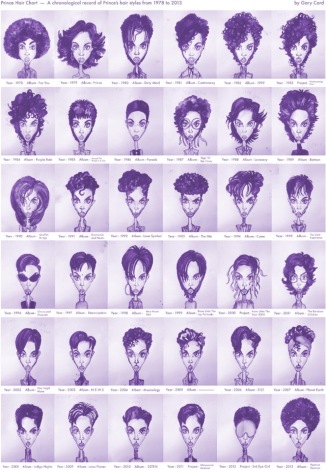 Just look at all the amazing designs she created for Prince and each one is different and made a statement. Of course always executed with perfection! Literally not a hair out of place.

Berry went on to work for her stylist sister in-law, then built her own clientele in a commission salon before renting her first booth. Then came what she now calls the “holy hookup.” She was friends with a bodyguard for Prince. Through him, she became friends with Prince’s stylist. Whenever the entourage arrived in L.A., they’d call Berry to join the party.

More than a great time to party, this was a place to learn. “I started studying her table. Whatever was on it, I read it, I started buying what she had,” said Berry. After all, this was the personal hairstylist to one of the greatest performers of the generation. Then, Prince’s stylist left. “I’d studied everything she had, I duplicated it, so when she left, I was ready. My kit was already built.”

Berry recalled walking into a club after Prince returned to L.A., having just learned that he needed a new stylist. “I was waiting for him. I met him at the club, put the portfolio on the table.”

Not long after that, she got a call. “Can you travel? … the plane leaves in an hour. We’re sending a car to pick you up.” All the way to LAX, she was screaming with excitement. She was in Minneapolis for Christmas, Miami, then New York, Atlanta and back to Los Angeles.

That was about the time that Prince did “Purple Rain.” Said Berry, “I ended up travelling the world with the artist for 25 years … he became my brother and my friend.” One thing leads to another and Berry has in that time done hair for other stars.

I loved this interview Kim gave news show 20/20. Her story is so very similar to my own experiences in being an aesthetic visual Artist you always want to be excellent at all times so you can give your clients the very best. And when your clients are the best so are you! Clearly Kim is one of the best, at the top of her game…EXCELLENT.

I have reached out to Kim for an interview. I hope we can chat up so I can share more of Kim’s beautiful work and career journey with you in a Part 2 Artist Spotlight here on TheGlamSquadFiles.