Sunday afternoon the VH1 Glam Squad meeting and rehearsals at Lincon Center in New York City. As you come to the corner of 66th and Columbus Avenue there are scores of trailers that line the streets on either side. Stage hands are setting up the area that will be The Red Carpet. What’s The Red Carpet for?…The 2016 VH1 Hip Hop Honors!

I meet with my colleague Department Head Derrick Kollock (Hair Designer & Colorist for Love & Hip Hop, The Wire, VH1, Confirmation the movie and the list goes on and on), we head to the production trailer for our Crew Credentials before entering the building. Walking down that street we are bombarded by the poster sized ads for the show featuring the images of the honorees Queen Latifah, Missy Elliot, Lil’ Kim and Salt & Peppa w DJ Spinderella.

I suddenly get butterflies in the pit of my stomach…not because of fear or nerves before a show but because of a healthy dose of pride. Proud of all of the ladies who are being honored on Monday.

CONGRATULATIONS LADIES!!! Years of hard work and perseverance in the business of entertainment as well as the challenges of personal life and, they, through it all still keep shining, brining the hits that make us dance and sometimes become the soundtracks to our lives.

I’m also proud to say that all the ladies being honored have been my clients throughout their careers and my career as Makeup Artist as well!

And on Monday I feel honored as well for all the years of work I put in working behind the scenes drafting what has now become iconic imagery in Hip Hop Music History!

I’m also proud to be the Makeup Department Head for my longest standing Hip Hop client Lil’ Kim in VH1’s Tribute to her. CONGRATULATIONS Kim❣❣❣❣My job…EASY…remixing my own iconic Lil’ Kim looks!! WOW! Kinda like giving a nod to my own work…lolol! Crazy right? 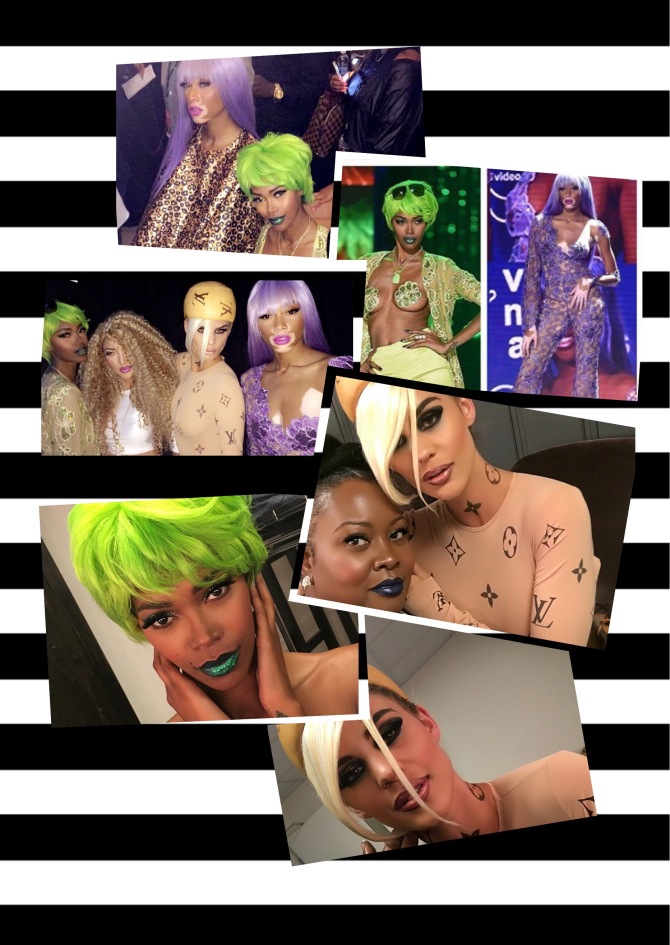 http://www.vh1.com/video-clips/u0fy2l/hip-hop-honors-2016-lil-kim-style-tribute
Okay, so as we leave the production trailer and head to the area where the dressing rooms are set up we walk down the halls past the rooms tagged on the doors are some of Hip Hops brightest and legendary females and honorees Artists Queen Latifah, Eve, Missy Elliot, Lil’Kim…then Nelly Furtado, Tweet, Fantasia, Amber Rose, Sway and the list goes on.

We drop our bags and head straight to wardrobe who is Department Headed by Eric Archibald (Beyonce’, Jennifer Hudson, etc,etc) and his team of stylists, seamstresses and runners taking up a room the size of a gymnasium!!!

We go into meeting!!! Strategizing the nights looks and break down the nights performing Artists and when they’re on and what they’re wearing. 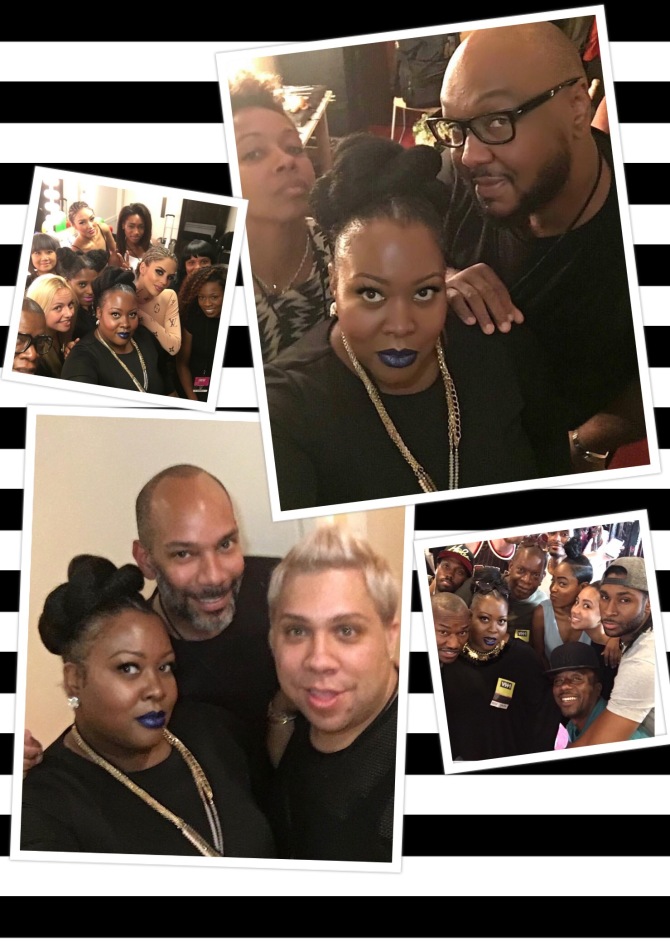 After that meeting Derrick and I go into serious pow wow meeting about Hair and Makeup designating to our assistants what their responsibilities will be for the show and the looks we are about to recreate.
The excitement is building…we know what we have to do but can we do it all with the time we’ve been given. “Okay guys lets turn it out!” Derrick says as he pulls out 3 amazing wigs that gave me flashbacks of the era’s hairstyles.

They were all stunning and handmade!! Unbelievable WOW! From the lavender, lime green and blonde curly I didn’t know which one I was in love with the most!

The hair assistants begin to sort out the wigs and station them as Derrick and I run downstairs to the stage to check the dress rehearsal for lighting and stage blocking.

Okay everything looks great! Let’s move it out and get ready for the show tomorrow…we’ve seen all we need to see here…kiss kiss let’s talk later if we need to and get a good nights rest because we’re back in tomorrow to turn this mutha out! See you then! Smooches!

What can I say about the honorees…they all give me chills with the level of their Artistry! They made Hip Hop History being the highest grossing female Hip Hop Artists!

The clients that I’ve had the longest standing relationship with have been both Missy Elliot and Lil’ Kim. Seeing both of these stupendous larger than life Ladies from the beginning of their careers has been phenomenal to be a part of and to see from the sidelines. 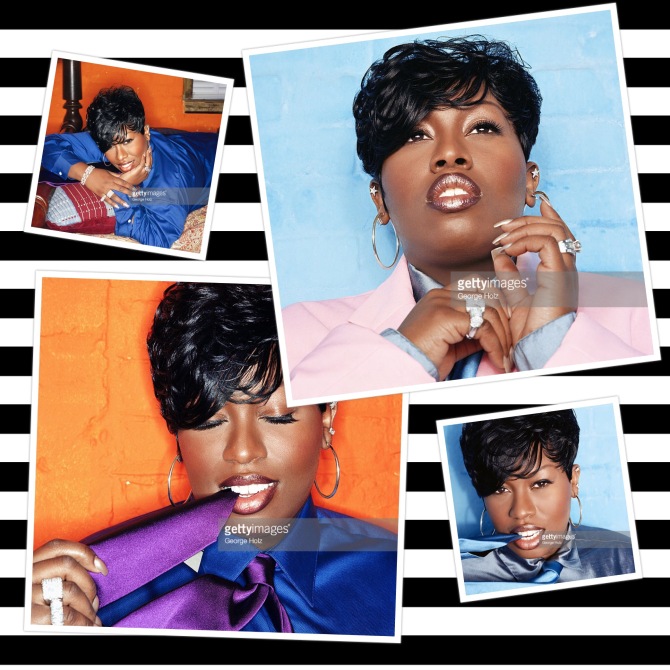 There has never been any Artist in Hip Hop male or female that has accomplished what Missy Elliot has bought to the table. Not only has she produced her own music but has a huge catalog of R&B hits (Grammy Nominated and Grammy Winning) that she produced for other Platinum Recording Artists!!

Yes no doubt, no questions whatsoever that Missy Elliot is an ICON!!

One of my fave music videos that feature both my Ladies Missy Elliot and Lil’ Kim one of the songs from the soundtrack to the movie Moulan Rouge Directed by Baz Lurmann. Missy was the Executive Producer of this track “Lady Marmalade”

Another fave of my that really set the industry on its ear audio and visual “Crush On You”. The visuals were a nod to the movie “The Wiz” starring Diana Ross (who Kim would meet not too long after at the MTV Awards…in the now famous purple pasty jumpsuit)

This is one of our first official music videos together “Get Money” where all 6 of my clients: Biggie, Mary J. Blige, Salt n Peppa and DJ Spinderella, Charli Baltimore and Lil’ Kim

All I can say is I worked for mine and I quote the line anytime someone tries to come for me!! In the words of Lil’ Kim…” I’m a leader y’all on some followin’ 💩, comin’ in this game on some modelin’ 💩…I’m the real son! It’s the real son!”

So many videos I did but I promise this is the last one I’ll post you can just look up all the rest on your own. I love how many visual changes we had in this one. I absolutely love Kim in the chocolate brown hair (it’s my personal favourite look)!!