THE ANCIENT EGYPTIANS (Africans/Black People):
Egypt is located in Africa. The Ancient Egyptians were the first physicians and first noted to create and mass produce makeup (eyeliner, eyeliner palettes, foundation, lip and nail tint), have makeup artists, hairstylists/ wig makers and manicurists. The first aestheticians were Africans. These were noble positions as many would serve the Royals and all in their Courts of the day. 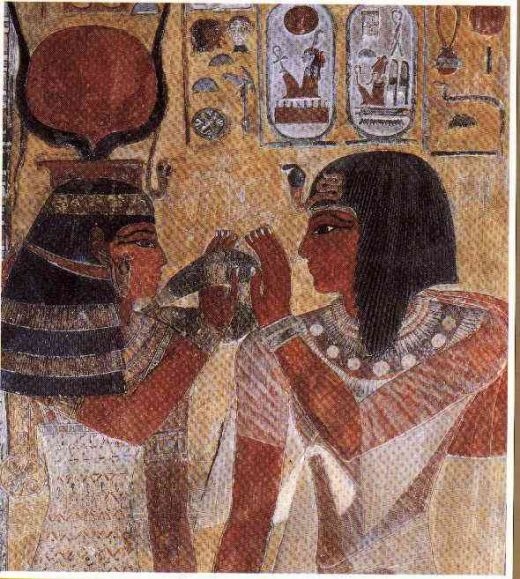 *All information below was researched on Wikipedia:*

THE EGYPTIANS:
The ancient Egyptians regarded beauty as a sign of holiness. Everything the ancient Egyptians used had a spiritual aspect to it, including cosmetics, which is why cosmetics were an integral part of their daily lives. In tombs, cosmetic palettes were found buried with the deceased as grave goods which further emphasized the idea that cosmetics were not only used for aesthetic purposes but rather magical and religious purposes.

Ancient Egyptians wore cosmetics regardless of gender or status, as they believed that cosmetics had magical power. They paid extra attention to eye makeup and they usually lined their eyes with a black galena, kohl (black eyeliner), that was placed in small kohl containers and applied with a wooden stick, creating an almond-shaped eye. The almond-shaped eye resembles the falcon eye of the God Horus.[citation needed]

The eye of Horus was believed by the Egyptians to have magical protective powers from the myth of the battle of Horus as revenge for his father Osiris, where it was said he lost his left eye which was later magically restored (Mannichie 34).

“Before presenting himself (the deceased) at the tribunal in the ‘Hall of Justice’ the candidate must purify himself, dress in white garments, make up his eyes and anoint himself. Only then may he enter the realm of Osiris” (qtd. in Sacred Luxuries 136). The deceased had to line his eyes with kohl in order for him to face the judgment of Osiris and move on to the afterlife. Moreover, ancient Egyptians, especially royalty, wished to preserve their youthfulness and be always depicted in an ideal state in art as part of their divine nature. They used oils such as castor oil, sesame oil and Moringa oil in their daily skin care regimen to fight wrinkles (Personal Hygiene and Cosmetics). Their favorite colors were black, green and purple.

THE HISTORY OF FOUNDATION:
Foundation is a skin coloured cosmetic applied to the face to create an even, uniform colour to the complexion, to cover flaws and, sometimes, to change the natural skintone. Foundation applied to the body is generally referred to as “body painting.”

The use of cosmetics to enhance complexion has been known since antiquity. “Face painting” is mentioned in the Old Testament (Ezekiel 23:40). Ancient Egyptians used foundation.

In 200 B.C., ancient Greek women applied white lead powder and chalk to lighten their skin. It was considered fashionable for Greek women to have a pale complexion. Roman women also favoured a pale complexion. Wealthy Romans favoured white lead paste, which could lead to disfigurements and death. Men also wore makeup to lighten their skin tone.[1] They used white lead powder, chalk, and creams to lighten their skin tone. The cream was made from animal fat, starch, and tin oxide.[2] The fat was rendered from animal carcasses and heated to remove the color. Tin oxide was made out of heating tin metal in open air. The animal fat provided a smooth texture, while the tin oxide provided color to the cream.[3]

Throughout the Middle Ages in Europe, it was considered fashionable for women to have pale skin, due to the association of tanned skin with outdoors work, and therefore the association of pale skin with affluence. In the 6th century, women would often bleed themselves to achieve a pale complexion.[4] During the Italian Renaissance, many women applied water–soluble lead paint to their faces. Throughout the 17th century and the Elizabethan era, women wore ceruse, a lethal mixture of vinegar and white lead. They also applied egg whites to their faces to create a shiny complexion.[5] Many men and women died from wearing lead-based make-up.

In the 18th century, Louis XV made it fashionable for men to wear lead-based makeup.[1] Theatrical actors wore heavy white base.[6]

In the late 18th and early 19th centuries, Victorian women wore little or no makeup. Queen Victoria abhorred make-up and deemed that it was only appropriate for prostitutes and loose women to wear it. It was only acceptable for actors or actresses to wear make-up. In the late 19th century, women would apply a whitening mixture made out of zinc oxide, mercury, lead, nitrate of silver, and acids. Some women stayed out of the sun, ate chalk, and drank iodine to achieve whiteness.[7]

In the Edwardian era, women wore base and did not bleach their skin as much as they did in previous centuries.[8]

Modern foundation can trace its roots to Carl Baudin of the Leipzeiger Stadt theatre in Germany. He is the inventor of greasepaint. He wanted to conceal the joint between his wig and forehead, so he developed a flesh-coloured paste made of zinc, ochre and lard. This formulation was so popular with other actors that Baudin began producing it commercially, and, as such, gave birth to the first theatrical makeup.[9]

This would be the standard for theatrical make-up until 1914, when makeup artist Max Factor created Flexible Greasepaint that was more reflective under the lighting on movie sets.[10] Although make-up would evolve dramatically from Baudin’s invention, theatrical make-up is, to this day, not too far removed from the original blend of fats and pigment.

Pan-Cake
The first commercially available foundation was Max Factor’s Pan-Cake. Originally developed for use in film, actresses were so taken with the results that Max Factor was overwhelmed with demand for the product for their personal use.

The breakthrough in his formula was the first “foundation and powder in one”; traditionally, an actor was made up with an oil/emollient-based make-up, which was then set with powder to reduce the reflection and ensure it would not fade or smudge.

Pan-Cake used talc—rather than oil or wax—as the base, and, applied directly to the skin with a wet sponge, it offered enough coverage (it could be layered without caking on the skin) to eliminate the need for a foundation underneath.

This was considered significantly more lightweight and natural-looking on the skin than the standard method, hence people’s eagerness to wear the item in public. Although foundation make-up was widely available and used within the film industry, the use of cosmetics in general was still somewhat disreputable, and no one had tried to market foundation (although lipstick, blush and nail polish were popular for daily use) as an everyday item.

Factor had the product patented in 1937, and, despite the economic turmoil of the era, Pan-Cake became one of the most successful cosmetic launches of all time. By 1940, it was estimated that one in three North American women owned and wore Pan-Cake.[11] As of February 2009, Procter and Gamble, the brand’s current owner, confirmed that the original formula Factor developed and used himself is still sold today.[citation needed]

MY FINAL SYNOPSIS OF THE HISTORY OF MAKEUP/FOUNDATION:

It’s been pretty interesting reading up on how over the centuries mankind has interpreted physical beauty. The things people did and still do to achieve what would be considered beauty. No wonder the beauty industry is a billion dollar industry.

I noticed a vast difference in the Ancient Egyptians methods to achieve beauty never required their deaths, drinking iodine and lead poisoning and such. They’d figured out the ways to medicinal health & beauty were by herbs, plant based pigments and oils. Why didn’t the rest of the world figure that out?! Was it because all of the Egyptian libraries containing those secrets were burned to the ground by the Roman invasion of Egypt? Mmmm…you do the homework on that.

However I must be frank. After combing over several articles written and photos I looked at in the researching of this article. Had I not done the extra homework one would think People of Color never existed in the creation of the cosmetics we’ve come to know today. The way some of these information sites and vintage photographs would have you think we never even existed.

Even after its been noted that we were the inventors of cosmetics that we had nothing to do with it. And though I give credit to Max Factor and the like we must remember we lived in a racially segregated and racists country during that time. And certainly no black people were allowed on those sets other than to play the help.

Black people were never seen in films other than as the unattractive, ungroomed and basically ignored house help. So no makeup was ever created for us during Hollywood’s Golden Era! Oh yes we had Madame CJ Walker who had a cosmetic empire based on Black Haircare (1900’s) our own films Directors (Oscar Micheaux and others) and Actors and Actresses and the basic lipstick, nail polish, blush and liner were available to us but no skintoned makeup was created for us in those early years. No nude colored stockings for our grandmothers that matched their nude tones.

Lets be honest here. And if this portion of the post makes some feel uncomfortable that’s good! We’ve come a long way in the world and in the beauty industry but we’ve still got far to go!! This article was meant to be one to grow on.